SM7741 was registered in Dumfries, Scotland, on the 19th of June, 1929. All new road vehicles were issued with a ‘log book’, as they were known, which was stamped each time a machine was taxed, once or twice a year. When all the spaces were used up, the old book was discarded and a new one issued. When I bought the machine, it came with a ‘continuation’ log book which provided some history from 1947. With the help of records preserved by the Dumfries Library, I have been able to piece together the early years of the story.

It is not apparent from the records whether SM7741 was fitted with a sidecar from new, although as a side-valve machine it is highly likely. When I bought the machine decades later, it still had sidecar fittings attached. The tax discs that I have, from 1947 and 1953, show the road tax paid to have been £3-15-0 (£3.75) which is the private car rate for 1947, calculated at 15 shillings (75p) per horsepower. The tax rate for a solo motorcycle over 250cc was £2-1-4 so it seems reasonable to assume that at this time it had more than two wheels! 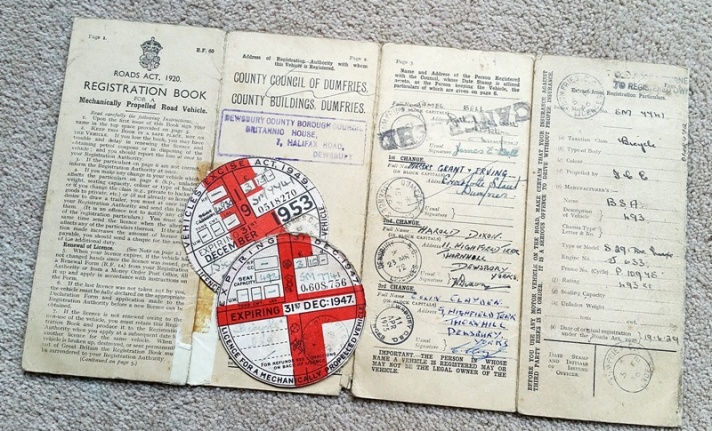 In June 1929, the proud new owner of SM7741 was a Mr Robert James White of Sydney House, Greenbrae Loaning in Dumfries, a red sandstone villa which still stands today. BSA did not have an agent in Dumfries, and it is likely that Mr White’s first journey on his new machine would have been from the railway station, where it would have been delivered by the BSA agent in Carlisle or Glasgow.

The economy, struggling in 1929, moved into full recession in 1930. Perhaps because of this, Mr White sold the Sloper after just nine months, to James Lublum of Mill Brae Terrace, which also still stands. The difficult economic situation deteriorated sharply in 1931 and, possibly due to financial pressure, Mr Lublum also parted with the machine after just a year, when it passed into the ownership of Kirkcudbright County Council on the 6th of April 1931. The Sloper remained with Kirkcudbright C.C. for the following 16 years; the next entry in the record, dated 29th June 1944, is particularly intriguing – ‘Ret’d RV’. I believe that this stands for Returned Requisitioned Vehicle – so it appears that SM7741 was requisitioned during the war years.

The Home Guard was officially stood down on the 3rd of December 1944. If the local Home Guard was operated by the County Council, they would have been responsible for civil defence, which was wound down fairly quickly after the Allied invasion of France, so the return date in the record of 29th of June 1944 is plausible. It is likely that SM7741, a useful hack with carrying capacity on its sidecar, was used for communications tasks by the Civil Defence in the Kirkcudbright area.

A continuation log book, issued on the 28th of January 1947, shows the owner as a Mr James Bell of Kirkton, near Dumfries. The address is a farm worker’s cottage, down an unmade lane beside the church, and Mr Bell was, presumably, a farm labourer. He was to own SM7741 for the next two years.

Interestingly, the log book stamps show that each time the machine was taxed, a Petrol Ration Book was also issued until rationing ended in the UK in May 1950.

By February 1949, SM7741 was owned by Grant & Irving, a motor dealers in Charlotte Street, Dumfries. The now 20 year-old BSA, probably with a ‘tradesman’s box’ sidecar fitted, would have been used for deliveries in the local area. The last taxation stamp in the log book is from 1954 and what became of SM7741 over the next couple of decades is unclear. The next owner entry in the log book was made 200 miles south in Dewsbury, West Yorkshire, when a Mr Harold Dixon put the machine back on the road in March 1972. Three years later he sold it to his next door neighbour, Colin Clayden.

This would have been a low point in the Sloper’s life. In the early ’70s, old machines like this changed hands for twenty or thirty pounds, and many ended up being ridden around fields or waste ground until they expired. By the end of the ’70s though, interest in older machines was taking off and SM7741 managed to escape the breaker’s yard.

Once again, there is a gap in the story until I bought SM7741 from Ken Julian of Doncaster in the summer of 1993. The Sloper was road-registered and in largely original condition, but ripe for restoration. The pictures on this site tell that story.

Around the year 2000, I went to a steam fair in the south of England where I saw a steam-powered road roller painted in the livery of Dumfries County Council. As I paused to admire this slumbering dinosaur, its registration mark caught my eye – it was separated by only a few numbers from my BSA Sloper. It was a curious thought that this quietly-steaming example of Victorian technology had been registered on almost the same day as my ‘modern’ motorcycle.

One thought on “A Traveller in Time – The Sloper’s Story”